death and decay of wound tissue infected by the soil bacterium Clostridium. Toxins produced by the bacterium cause putrefactive decay of connective tissue with the generation of gas. Treatment is usually by surgery.

gaseous gangrene 1. an acute, severe, painful condition, often resulting from dirty, lacerated wounds, with muscles and subcutaneous tissues becoming filled with gas and a serosanguineous exudate. The condition is due to infection by anaerobic bacteria, among which are Clostridium perfringens, C. novyi, C. septicum, C. sporogenes, and other species of Clostridium. Called also clostridial myonecrosis. 2. a similar condition in domestic animals, such as occurs with malignant edema, blackleg, and braxy. 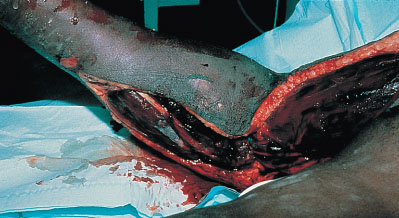 Extensive gas gangrene due to Clostridium perfringens that has developed in an untreated knife wound.