Immunoglobulin
A protein produced by plasma cells and lymphocytes. Immunoglobulins are an essential part of the body's immune system which attach to foreign substances, such as bacteria, and assist in destroying them. Abbreviated Ig. The classes of immunoglobulins are immunoglobulin A (IgA), immunoglobulin G (IgG), immunoglobulin M (IgM), immunoglobulin D (IgD) and immunoglobulin E (IgE).
* * *
One of a class of structurally related proteins, each consisting of two pairs of polypeptide chains, one pair of light (L) [low molecular weight] chains (κ or λ), and one pair of heavy (H) chains (γ, α, μ, δ, and ε), usually all four linked together by disulfide bonds. On the basis of the structural and antigenic properties of the H chains, Ig's are classified (in order of relative amounts present in normal human serum) as IgG (7S in size, 80%), IgA (10–15%), IgM (19S, a pentamer of the basic unit, 5–10%), IgD (less than 0.1%), and IgE (less than 0.01%). All of these classes are homogeneous and susceptible to amino acid sequence analysis. Each class of H chain can associate with either κ or λ L chains. Subclasses of Ig's, based on differences in the H chains, are referred to as IgG1, etc. When split by papain, IgG yields three pieces: the Fc piece, consisting of the C-terminal portion of the H chains, with no antibody activity but capable of fixing complement, and crystallizable; and two identical Fab pieces, carrying the antigen-binding sites and each consisting of an L chain bound to the remainder of an H chain. Antibodies are Ig's, and all Ig's probably function as antibodies. However, Ig refers not only to the usual antibodies, but also to a great number of pathological proteins classified as myeloma proteins, which appear in multiple myeloma along with Bence Jones proteins, myeloma globulins, and Ig fragments. From the amino acid sequences of Bence Jones proteins, it is known that all L chains are divided into a region of variable sequence (VL) and one of constant sequence (CL), each comprising about half the length of the L chain. The constant regions of all human L chains of the same type (κ or λ) are identical except for a single amino acid substitution, under genetic controls. H chains are similarly divided, although the VH region, while similar in length to the VL region, is only one-third or one-fourth the length of the CH region. Binding sites are a combination of VL and VH protein regions. The large number of possible combinations of L and H chains make up the “libraries” of antibodies of each individual.
- anti- D i. SYN: RHo(D) immune globulin.
- chickenpox i. SYN: chickenpox immune globulin (human).
- i. domains structural units of i. heavy or light chains that are composed of approximately 110 amino acid s. Light chains of an i. are composed of one constant domain and one variable domain. Heavy chains are composed of either three or four constant domains and one variable domain.
- i. G subclass deficiency a rare inherited disorder in which there are reduced levels of one or more IgG subclasses resulting from defective heavy chain genes or an abnormality in the regulation of i. isotype switching.
- human normal i. SYN: human gamma globulin.
- measles i. SYN: measles immune globulin (human).
- monoclonal i. a homogeneous i. resulting from the proliferation of a single clone of plasma cells and which, during electrophoresis of serum, appears as a narrow band or “spike”; it is characterized by heavy chains of a single class and subclass, and light chains of a single type. SYN: M protein (2), monoclonal protein, paraprotein (2).
- pertussis i. SYN: pertussis immune globulin.
- poliomyelitis i. SYN: poliomyelitis immune globulin (human).
- rabies i. SYN: rabies immune globulin (human).
- Rho(D) i. SYN: RHo(D) immune globulin.
- secretory i. usually IgA but may be IgM linked to a secretory component and found in mucous secretions.
- secretory i. A a subclass of IgA that is found primarily in secretions such as tears and colostrum. This form of IgA is protected from proteolytic degradation by the presence of a secretory component.
- selective i. A deficiency an inherited disorder in which there is a markedly reduced or absent IgA, resulting in immature IgA-bearing B cells.
- tetanus i. SYN: tetanus immune globulin.
- thyroid-stimulating immunoglobulins (TSI) in Graves disease, the antibodies to TSH receptors in the thyroid gland. These antibodies are produced by B-lymphocytes and stimulate the receptors, causing hyperthyroidism. Formerly known as LATS (long-acting thyroid stimulator).

(Ig)
n.
one of a group of structurally related proteins (gammaglobulin) that act as antibodies. Several classes of Ig with different functions are distinguished - IgA, IgD, IgE, IgG, and IgM. They can be separated by immunoelectrophoresis. See antibody.

im·mu·no·glob·u·lin (im″u-no-globґu-lin) any of the structurally related glycoproteins that function as antibodies, divided into five classes (IgM, IgG, IgA, IgD, and IgE) on the basis of structure and biologic activity. The basic structural unit of the immunoglobulin molecule, referred to as a monomer, is a Y-shaped molecule composed of two heavy (H) chains and two light (L) chains (see illustration). IgD, IgG, and IgE occur only as monomers; IgM and IgA may occur as monomers or polymers. The polymeric forms contain an additional polypeptide called the J chain, and secretory IgA contains another structure called the secretory component (SC). Each chain consists of a variable region (VH or VL) and a constant region (CH or CL), which are coded for by different genes. Parts of the VH and VL regions make up the antigen-binding site, one on each â€œarmâ€ (Fab region) of the monomer. An individual can make about 104 different VH regions and 103 VL regions, which combine to make about 107 different antigen-binding sites, each with a distinct antigenic specificity. Parts of the CH regions make up the â€œbodyâ€ (Fc region) of the monomer, which contains various sites responsible for the biological activity of the molecule. In any one immunoglobulin molecule, all of the H chains are identical, as are the L chains. The CH region determines both the heavy chain class to which the H chain belongs and the immunoglobulin class to which the molecule belongs. The H chain classes are denoted by the Greek letters (μ, δ, γ, ε, and α) corresponding to the Latin letters of the immunoglobulin classes, e.g., μ to IgM. There are two types of light chains (denoted κ and λ), either of which may combine with any of the heavy chains and thus occur in any of the immunoglobulin classes. In human immunoglobulins, three of the classes (IgM, IgG, and IgA) have subclasses; i.e., there are several similar but distinct CH region genes in these classes. In addition, the λ light chain type has subtypes. The subclasses (subtypes) are denoted by numerical suffixes, e.g., IgG1 and γ1 subclasses and λ2 subtype. Immunoglobulins (monomeric IgM and IgD) first appear on the surface of B cells as antigen receptors. When a cell is activated by contact with antigen and differentiates into a plasma cell, the cell continues to produce the same L chain and VH region of the H chain, but gene rearrangement may occur to attach this VH region to a different CH region (class switching). Thus the secreted immunoglobulin may be of any class but has the same antigenic specificity as the antigen receptors of the parent B cell. In addition to the effects produced solely by the binding of antigen by antibody, e.g., viral neutralization or the inability of some bacteria to invade mucosal surfaces when coated by antibody, certain classes of antibodies can trigger other processes when bound to antigen: IgM and IgG activate the classic complement pathway, IgA and IgG activate the alternative pathway, and IgM, IgG1, and IgG3 act as opsonins, triggering phagocytosis of the bound antigens by macrophages and neutrophils. IgE has the unique function of mediating immediate hypersensitivity (q.v.) reactions; it binds to specific receptors on basophils and mast cells and triggers the release of mediators on contact with antigen. IgG is the only class transferred across the placenta, providing the fetus and neonate with protection against infection. See also immunoglobulin genes, under gene, homology region, under region, and allotype, idiotype, and isotype. 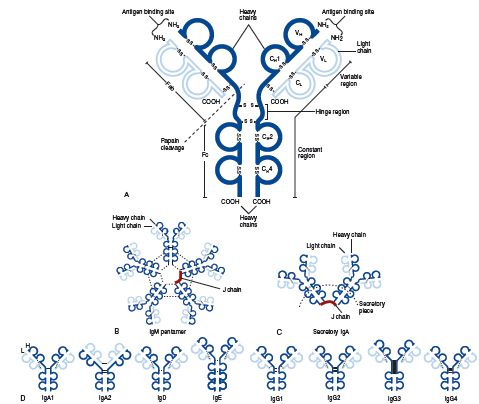 Molecular structure of the five classes of immunoglobulins. (A), Schematic representation, using an IgG1 molecule, of the basic arrangement of heavy and light chains into the four-polypeptide chain unit, the antigen binding sites, the variable, constant, and hinge regions, and the site of papain cleavage generating the Fab and Fc fragments. Both intra- and interchain disulfide bonds are depicted (