heart 'härt n
1) a hollow muscular organ of vertebrate animals that by its rhythmic contraction acts as a force pump maintaining the circulation of the blood and that in the human adult is about five inches (13 centimeters) long and three and one half inches (9 centimeters) broad, is of conical form, is placed obliquely in the chest with the broad end upward and to the right and the apex opposite the interval between the cartilages of the fifth and sixth ribs on the left side, is enclosed in a serous pericardium, and consists as in other mammals and in birds of four chambers divided into an upper pair of rather thin-walled atria which receive blood from the veins and a lower pair of thick-walled ventricles into which the blood is forced and which in turn pump it into the arteries
2) a structure in an invertebrate animal functionally analogous to the vertebrate heart

n.
a hollow muscular cone-shaped organ, lying between the lungs, with the pointed end (apex) directed downwards, forwards, and to the left. The heart is about the size of a closed fist. Its wall consists largely of cardiac muscle (myocardium), lined and surrounded by membranes (see endocardium, pericardium). It is divided by a septum into separate right and left halves, each of which is divided into an upper atrium and a lower ventricle. Deoxygenated blood from the vena cavae passes through the right atrium to the right ventricle. This contracts and pumps blood to the lungs via the pulmonary artery. The newly oxygenated blood returns to the left atrium via the pulmonary veins and passes through to the left ventricle. This forcefully contracts, pumping blood out to the body via the aorta. The direction of blood flow within the heart is controlled by valve.

(hahrt) [L. cor; Gr. kardia] the viscus of cardiac muscle that maintains the circulation of the blood. Called also cor [TA]. It is divided into four cavitiesâ€”two atria and two ventricles. The left atrium receives oxygenated blood from the lungs. From there the blood passes to the left ventricle, which forces it via the aorta through the arteries to supply the tissues of the body. The right atrium receives the blood after it has passed through the tissues and given up much of its oxygen. The blood then passes to the right ventricle, and then to the lungs, to be oxygenated. The major valves are four in number: the left atrioventricular valve (mitral), between the left atrium and ventricle; the right atrioventricular valve (tricuspid), between the right atrium and ventricle; the aortic valve, at the orifice of the aorta; and the pulmonary valve, at the orifice of the pulmonary trunk. The heart tissue itself is nourished by the blood in the coronary arteries. See Plate 18. 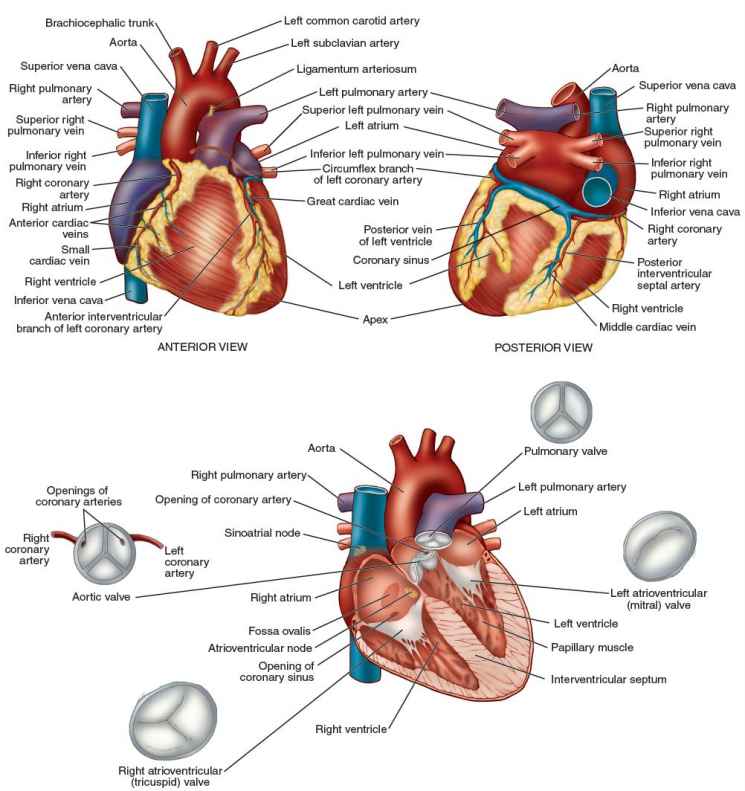 PLATE 18â€”STRUCTURES OF THE HEART