Tay-Sachs disease
Tay-Sachs disease 'tā-'saks- n a hereditary disorder of lipid metabolism that typically affects individuals of eastern European Jewish ancestry, that is marked by the accumulation of lipids esp. in nervous tissue due to a deficiency of hexosaminidase A, that is characterized by weakness, macrocephaly, red retinal spots, hyperacusis, retarded development, blindness, convulsions, paralysis, and death in early childhood, and that is inherited as an autosomal recessive trait called also infantile amaurotic idiocy, Tay-Sachs see SANDHOFF'S DISEASE compare GAUCHER'S DISEASE, NIEMANN-PICK DISEASE
Tay Warren (1843-1927)
British physician. Tay specialized in ophthalmology, dermatology, and pediatrics. In 1881 he described a degenerative condition of the choroid found in a genetic disorder of lipid metabolism.
Sachs Bernard (1858-1944)
American neurologist. Sachs was a neurologist associated with several New York City hospitals. In 1887 he published a comprehensive description of a genetic disorder of lipid metabolism. His observations were made independently of Tay. The condition is known as Tay-Sachs disease as an acknowledgment of Sachs' later but more comprehensive account.

(amaurotic familial idiocy)
an inherited disorder of lipid metabolism (see lipidosis) in which abnormal accumulation of lipid in the brain leads to blindness, mental retardation, and death in infancy. The gene responsible for the disorder is recessive, and the disease can now be largely prevented by genetic counselling in communities known to be affected.
W. Tay (1843-1927), British physician; B. Sachs (1858-1944), US neurologist

(TSD) an autosomal recessive lysosomal storage disease, occurring particularly in Ashkenazi Jews; it is a GM2 gangliosidosis characterized by deficiency of hexosaminidase A, and caused by mutation in the HEXA gene, which encodes the α subunit of that enzyme. The classic infantile form is characterized by infantile onset (3â€“6 months), doll-like facies, cherry-red macular spot (90+ per cent of the infants), early blindness, hyperacusis, macrocephaly, seizures, and hypotonia; the children die between 2 and 5 years of age. There are also juvenile and adult forms, with increased age of onset correlated with decreased severity and greater heterogeneity. See also Sandhoff d. 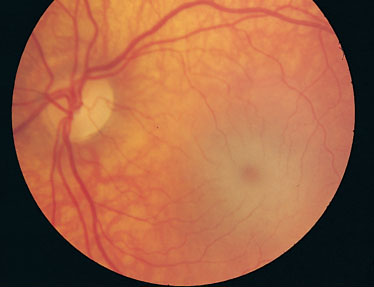