lens also lense 'lenz n
1) a curved piece of glass or plastic used singly or combined in eyeglasses or an optical instrument (as a microscope) for forming an image by focusing rays of light
2) a device for directing or focusing radiation other than light (as sound waves, radio microwaves, or electrons)
3) a highly transparent biconvex lens-shaped or nearly spherical body in the eye that focuses light rays entering the eye typically onto the retina, lies immediately behind the pupil, is made up of slender curved rod-shaped ectodermal cells in concentric lamellae surrounded by a tenuous mesoblastic capsule, and alters its focal length by becoming more or less spherical in response to the action of the ciliary muscle on a peripheral suspensory ligament
lensed adj
lens·less adj

n.
1. (in anatomy) the transparent crystalline structure situated behind the pupil of the eye and enclosed in a thin transparent capsule. It helps to refract incoming light and focus it onto the retina. See also accommodation.
2. (in optics) a piece of glass shaped to refract rays of light in a particular direction. Convex lenses converge the light, and concave lenses diverge it; they are worn to correct faulty eyesight. See also bifocal lens, contact lenses, trifocal lenses.

(lenz) [L. â€œlentilâ€] a piece of glass or other transparent substance so shaped as to converge or scatter the rays of light, especially the glass used in appropriate frames or other instruments to increase the visual acuity of the human eye. See also glasses and spectacles. [TA] the transparent biconvex body of the eye situated between the posterior chamber and the vitreous body, constituting part of the refracting mechanism of the eye. Called also l. crystallina or crystalline l. 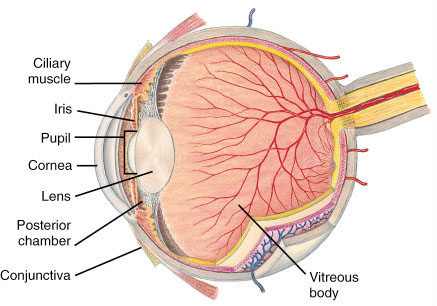