jaun·dice 'jȯn-dəs, 'jän- n
1) a yellowish pigmentation of the skin, tissues, and certain body fluids caused by the deposition of bile pigments that follows interference with normal production and discharge of bile (as in certain liver diseases) or excessive breakdown of red blood cells (as after internal hemorrhage or in various hemolytic states) called also icterus
2) any disease or abnormal condition (as hepatitis A or leptospirosis) that is characterized by jaundice called also icterus

n.
a yellowing of the skin or whites of the eyes, indicating excess bilirubin (a bile pigment) in the blood. Jaundice is classified into three types. Obstructive jaundice occurs when bile made in the liver fails to reach the intestine due to obstruction of the bile duct (e.g. by gallstones) or to cholestasis. The urine is dark, the faeces pale, and the patient may itch. Hepatocellular jaundice is due to disease of the liver cells, such as hepatitis, when the liver is unable to utilize the bilirubin, which accumulates in the blood. The urine may be dark but the faeces retain their colour. Haemolytic jaundice occurs when there is excessive destruction of red cells in the blood (see haemolysis). Urine and faeces retain their normal colour. Medical name: icterus.

jaun·dice (jawnґdis) [Fr. jaunisse, from jaune yellow] a condition characterized by hyperbilirubinemia and deposition of bile pigments in the skin, mucous membranes, and sclera, with resulting yellow appearance of the patient; called also icterus. 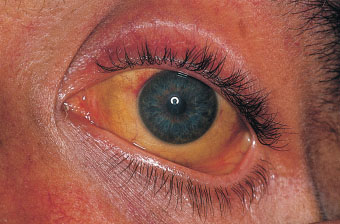 Jaundice and subconjunctival hemorrhages in leptospirosis.