Fetal circulation
The blood circulation in the fetus before birth. Before birth, the blood from the heart headed for the lungs in the aptly named pulmonary artery is shunted away from the lungs and returned to the greatest of arteries, the aorta. This arterial shunting occurs through a short vessel called the ductus arteriosus. When the shunt is open, it is said to be patent (pronounced pá tent). The ductus arteriosus usually tourniquets itself off at or shortly after birth. After closure of the ductus, blood is permitted from that time on to course freely to the lungs. Sometimes, however, the patent ductus arteriosus (PDA) persists and simply will not close by itself. Surgery is then done to ligate (tie off) the ductus PDA ligation is a closed-heart operation. Historically, it was one of the earliest surgical procedures performed in children with cardiovascular disease.

the circulation propelled by the fetal heart through the fetus, umbilical cord, and chorionic villi of the placenta, supplying oxygen and nutritive material and eliminating carbon dioxide and nitrogenous wastes. 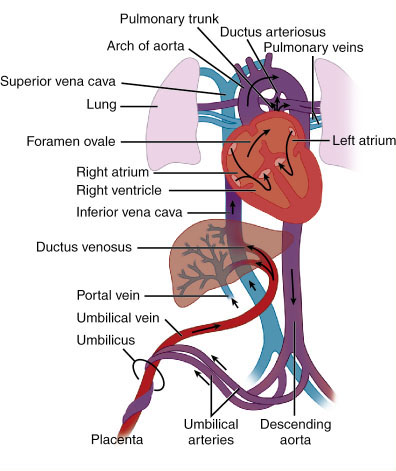 Schematic diagram of fetal circulation, with red indicating the highest level of oxygen saturation, blue the lowest, and purple an intermediate level.