liv·er 'liv-ər n
1 a) a large very vascular glandular organ of vertebrates that secretes bile and causes important changes in many of the substances contained in the blood which passes through it (as by converting sugars into glycogen which it stores up until required and by forming urea), that in humans is the largest gland in the body, weighs from 40 to 60 ounces (1100 to 1700 grams), is a dark red color, and occupies the upper right portion of the abdominal cavity immediately below the diaphragm, that is divided by fissures into five lobes, and that receives blood both from the hepatic artery and the portal vein and returns it to the systemic circulation by the hepatic veins
b) any of various large compound glands associated with the digestive tract of invertebrate animals and prob. concerned with the secretion of digestive enzymes
2) the liver of an animal (as a calf or pig) eaten as food or used as a source of pharmaceutical products (as liver extract)
3) disease or disorder of the liver: BILIOUSNESS

n.
the largest gland of the body, weighing 1200-1600 g. Situated in the top right portion of the abdominal cavity, the liver is divided by fissures (fossae) into four lobes: the right (the largest lobe), left, quadrate, and caudate lobes. It is connected to the diaphragm and abdominal walls by five ligaments: the membranous falciform (which separates the right and left lobes), coronary, and right and left triangular ligaments and the fibrous round ligament, which is derived from the embryonic umbilical vein. Venous blood containing digested food is brought to the liver in the hepatic portal vein (see portal system). Branches of this vein pass in between the lobules and terminate in the sinusoids.
Oxygenated blood is supplied in the hepatic artery. The blood leaves the liver via a central vein in each lobule, which drains into the hepatic vein. The liver is supplied by parasympathetic nerve fibres from the vagus nerve, and by sympathetic fibres from the solar plexus. The liver has a number of important functions. It synthesizes bile, which drains into the gall bladder before being released into the duodenum. The liver is an important site of metabolism of carbohydrates, proteins, and fats. It regulates the amount of blood sugar, converting excess glucose to glycogen; it removes excess amino acids by breaking them down into ammonia and finally urea; and it stores and metabolizes fats. The liver also synthesizes fibrinogen and prothrombin (essential blood-clotting substances) and heparin, an anticoagulant. It forms red blood cells in the fetus and is the site of production of plasma proteins. It has an important role in the detoxification of poisonous substances and it breaks down worn out red cells and other unwanted substances, such as excess oestrogen in the male (see also Kupffer cells). The liver is also the site of vitamin A synthesis; this vitamin is stored in the liver, together with vitamins B12, D, and K.
The liver is the site of many important diseases, including hepatitis, cirrhosis, amoebic dysentery, hydatid disease, and hepatoma.

liv·er (livґər) [L. jecur; Gr. hēpar] 1. a large gland of a dark red color found in the upper part of the abdomen on the right side. Its domed upper surface fits closely against and is adherent to the inferior surface of the right diaphragmatic dome, and it has a double blood supply from the hepatic artery and the portal vein. Its traditional anatomic divisions have been four lobes, the left lobe (lobus hepatis sinister), right lobe (lobus hepatis dexter), caudate lobe (lobus caudatus hepatis), and quadrate lobe (lobus quadratus hepatis). Based on the internal blood supply and biliary drainage, a newer anatomic system divides the liver into three regions, the left liver (pars hepatis sinistra), right liver (pars hepatis dextra), and posterior liver (pars posterior hepatis), with the latter being identical to the caudate lobe. The liver is made up of thousands of minute lobules (see lobuli hepatis), which are its functional units. Among its many functions are the storage and filtration of blood, secretion of bile, excretion of bilirubin and other substances formed elsewhere in the body, and numerous metabolic functions, including the conversion of sugars into glycogen, which it stores. Called also hepar [TA]. 2. the same gland of certain animals, sometimes used as food or from which pharmaceutical products are prepared. 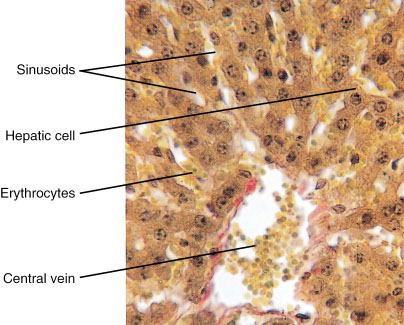 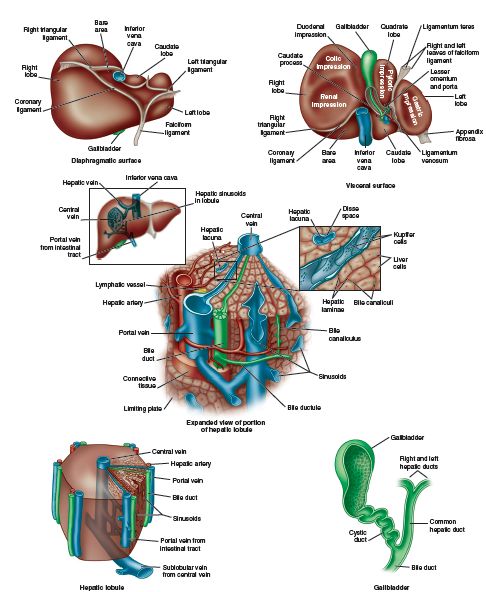 PLATE 24 STRUCTURE OF THE LIVER