goiter
A chronic enlargement of the thyroid gland, not due to a neoplasm, occurring endemically in certain localities, especially regions where glaciation occurred and the soil is low in iodine, and sporadically elsewhere. SYN: struma (1). [Fr. from L. guttur, throat]
- aberrant g. enlargement of a supernumerary thyroid gland. SYN: struma aberrata.
- acute g. a g. that develops very rapidly.
- adenomatous g. an enlargement of the thyroid gland due to the growth of one or more encapsulated adenomas or multiple nonencapsulated colloid nodules within its substance.
- Basedow g. colloid g. which becomes hyperfunctional after the ingestion of excess iodine, the Jod-Basedow phenomenon.
- cabbage g. g. due to ingestion of cabbage or other goitrogenic foodstuff.
- colloid g. a form of g. in which the contents of the follicles increase greatly, causing pressure atrophy of the epithelium so that the gelatinous matter predominates in the tumor. SYN: struma colloides.
- cystic g. an enlargement in the thyroid region due to the presence of one or more cysts within the gland.
- diffuse g. g. in which the morbid process involves the whole gland, as opposed to nodular g. or thyroid adenoma.
- diving g. a freely movable g. that is sometimes above and sometimes below the sternal notch. SYN: wandering g..
- endemic g. g., usually of simple type, prevalent in certain regions where dietary intake of iodine is suboptimal.
- exophthalmic g. any of the various forms of hyperthyroidism in which the thyroid gland is enlarged and exophthalmos is present.
- familial g. a group of heritable thyroid disorders in which g. is commonly apparent first during childhood; often associated with skeletal and/or mental retardation, and with other signs of hypothyroidism that may develop with age. Various types of familial g. have been identified: 1) iodide transport defect [MIM*274400]; of autosomal recessive inheritance caused by mutation in the sodium iodide symporter gene (SLC5A5) on 19p, in which the gland is unable to concentrate iodide; 2) organification defect [MIM*274500 and *274600], in which the iodination of tyrosine is defective; 3) Pendred syndrome [MIM*274600]; autosomal recessive inheritance caused by mutation in the Pendred syndrome gene (PDS) on 7q; 4) coupling defect, in which cretinism results from defective coupling of iodotyrosines to form iodothyronines [MIM*274700]; 5) iodotyrosine deiodinase defect, in which deiodination of iodotyrosine is defective, considerable glandular loss of these hormonal precursors occurs, and cretinism may be present [MIM*274800]; 6) plasma iodoprotein disorder [MIM*274900], in which an abnormal iodinated serum protein that is insoluble in acidic butanol is present; 7) hereditary hyperthyroidism.
- fibrous g. a firm hyperplasia of the thyroid and its capsule.
- follicular g. SYN: parenchymatous g..
- lingual g. a tumor of thyroid tissue involving the embryonic rudiment at the base of the tongue.
- microfollicular g. g. in which the glandular tissue consists of unusually small colloid filled follicles and areas of undifferentiated tissue with indistinct follicle formation.
- multinodular g. adenomatous g. with several colloid nodules.
- nontoxic g. g. not accompanied by hyperthyroidism.
- parenchymatous g. a form of g. in which there is a great increase in the follicles with proliferation of the epithelium. SYN: follicular g..
- simple g. thyroid enlargement unaccompanied by constitutional effects, e.g., hypo- or hyperthyroidism, commonly caused by inadequate dietary intake of iodine.
- substernal g. enlargement of the thyroid gland, chiefly of the lower part of the isthmus, palpable with difficulty or not at all.
- suffocative g. a g. that by pressure causes extreme dyspnea.
- thoracic g. enlargement of accessory thyroid tissue in the thorax with or without hyperthyroidism.
- toxic g. a g. that forms an excessive secretion, causing signs and symptoms of hyperthyroidism.
- wandering g. SYN: diving g..

goi·ter or chiefly Brit goi·tre 'gȯit-ər n an enlargement of the thyroid gland that is commonly visible as a swelling of the anterior part of the neck, that often results from insufficient intake of iodine and then is usu. accompanied by hypothyroidism, and that in other cases is associated with hyperthyroidism usu. together with toxic symptoms and exophthalmos called also struma
goi·trous 'gȯi-trəs also goi·ter·ous 'gȯit-ə-rəs adj

goi·ter (goiґtər) [L. guttur throat] an enlargement of the thyroid gland, causing a swelling in the front part of the neck. Called also struma. goitrous adj 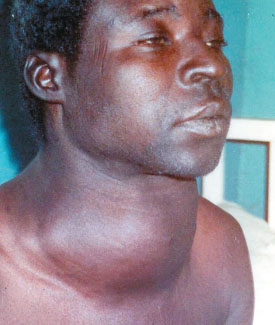