complement
Ehrlich term for the thermolabile substance, normally present in serum, that is destructive to certain bacteria and other cells sensitized by a specific c.-fixing antibody. C. is a group of at least 20 distinct serum proteins, the activity of which is affected by a series of interactions resulting in enzymatic cleavages and which can follow one or the other of at least two pathways. In the case of immune hemolysis (classical pathway), the complex comprises nine components (designated C1 through C9) that react in a definite sequence and the activation of which is usually effected by the antigen-antibody complex; only the first seven components are involved in chemotaxis, and only the first four are involved in immune adherence or phagocytosis or are fixed by conglutinins. An alternative pathway (see properdin system) may be activated by factors other than antigen-antibody complexes and involves components other than C1, C4, and C2 in the activation of C3. SEE ALSO: component of c.. [L. complementum, that which completes, fr. com-pleo, to fill up]
- heparin c. the protein component of heparin in blood.
- c. pathways 1. the classical c. pathway (initiated usually by binding of C1 to IgG or IgM antibody to C1)is a complex of three subunits: C1q, C1r, and C1s. After C1q is bound, C1r (an overbar indicates enzymatic activity) cleaves C1s to C1s. C1s cleaves both C4 into C4a and C4b as well as C2 into C2a and C2b. C2b combines with C4b to form C4b2b, which is a C3 convertase. C3 convertase cleaves C3 into C3a and C3b. C3b joins C4bC2b to form a C5 convertase (also known as C4b2b3b), which cleaves C5 into C5a and C5b. Once C5b is bound to the cell surface the remainder of the c. components (C6–C9) as well as C5b form the membrane attack complex (MAC). MAC causes a hole in the cell membrane. 2. in the alternative c. pathway, surface-bound C3b binds Factor B, which is cleaved by Factor D into Ba and Bb. C3bBb is an unstable C3 convertase unless properdin (P) binds to it to form C3bBbP. The stable C3 convertase generates more C3b. When a complex of C3bBbC3b is formed, this is the alternative pathway C5 convertase. From C5b through C9, the classical and alternative pathways are the same. 3. In the lectin-binding pathway, mannose-binding protein (MBP) initiates the pathway, which then uses components of the classical c. pathway. Some of the “a” components of both pathways have various biologic activities, i.e., C3a is an anaphylatoxin.

com·ple·ment 'käm-plə-mənt n
1) a group or set (as of chromosomes or DNA) that is typical of the complete organism or one of its parts see CHROMOSOME COMPLEMENT
2) a complementary color
3) the thermolabile group of proteins in normal blood serum and plasma that in combination with antibodies causes the destruction esp. of particulate antigens (as bacteria and foreign blood corpuscles)

n.
a system of functionally linked proteins that interact with one another to aid the body's defences when antibody combine with antigen. Complement is involved in the breaking-up (lysis) and opsonization of foreign organisms. It is also involved in inflammation and clearing immune (antigen-antibody) complexes.

com·ple·ment (komґplə-mənt) [L. complēre to fill out or up] a term originally used to refer to the heat-labile factor in serum that causes immune cytolysis, the lysis of antibody-coated cells. It is now used to refer to the entire functionally related system comprising at least 20 distinct serum proteins, their cellular receptors, and related regulatory proteins that is the effector not only of immune cytolysis but also of other biologic functions including anaphylaxis, phagocytosis, opsonization, and hemolysis. Complement activation occurs by two different sequences, the classical and alternative pathways (qq.v.). All of the components of complement, designated C1 through C9, participate in the classical pathway; the alternative pathway lacks components C1, C2, and C4 but adds factors B and D and properdin. Regulatory proteins include factors H and I, clusterin, C3 nephritic factor, decay accelerating factor, homologous restriction factor, anaphylatoxin inactivator, C1 inhibitor, C4 binding protein, membrane cofactor protein, protectin, and vitronectin. Activation of the classical pathway triggers an enzymatic cascade involving C1, C4, C2, and C3; activation of the alternative pathway triggers a cascade involving C3 and factors B and D and properdin. Both result in the cleavage of C5 and the formation of the membrane attack complex, which in its final state creates a pore in the cell wall and causes cell lysis. See illustration. Complement activation also results in the formation of many biologically active complement fragments that act as anaphylatoxins, opsonins, or chemotactic factors. NOTE: Fragments resulting from proteolytic cleavage of complement proteins are designated with lower-case-letter suffixes, e.g., C3a. By convention, the smaller initial cleavage fragment is designated â€œaâ€ and the larger â€œb,â€ excepting the fragments C2a and C2b generated from C2, where the larger, active fragment has conventionally been designated C2a. Inactivated fragments are designated by the prefix â€œi,â€ e.g., iC3b. Terminology of activated components or complexes with biologic activity is quite variable. A bar over the symbol is sometimes used, e.g., C1 or C4b,2a, and in designating multicomponent complexes, commas may or may not be present between components, and the â€œaâ€ and â€œbâ€ designations may or may not be used. Thus, C4b,2a may also be written C4b,2a, C4b2a, C4b2a, C42, or C42. Some authors use the overbar for any activated component, while others reserve it specifically for those with enzymatic activity. 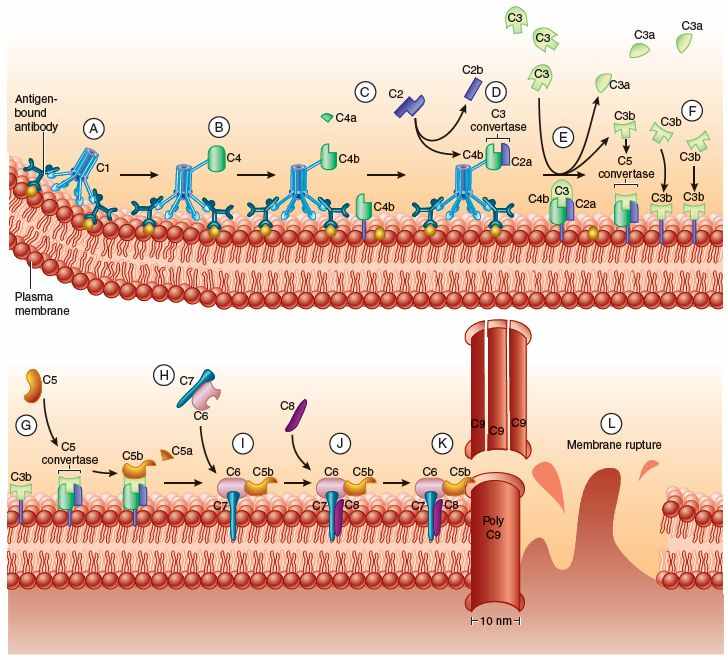 Schematic representation of the classical complement pathway. The pathway is initiated by binding of two antibody molecules to a multivalent antigen, followed by binding of complement protein C1q, and then by binding of two molecules each of C1r and C1s to C1q to form the active complex C1 (A). C4 binds to the C1q portion of C1 (B), and the esterolytic site on C1s activates C4 by splitting off C4b, which binds the antigen-antibody complex or the nearby cell surface (C). The same site on C1s then cleaves and activates C2 which has bound to C4b, yielding a C4b2a complex (C3 convertase) (D). The C3 convertase binds C3 and cleaves it to the active form C3b (E), which binds to the cell surface and to the C3 convertase to form a C4b2a3b complex (C5 convertase) (F). The late phase of complement activation begins when the C5 convertase cleaves C5 to the active form C5b (G). C5b remains at the cell surface and binds first C6 then C7 (H); the latter is hydrophobic and inserts into the plasma membrane (I), where it is joined by C8 (J). As many as 19 molecules of C9 then polymerize at C5678 to form pores in the plasma membrane (K); this final complex is called the membrane attack complex (MAC). Entry of water through the pores into the cell causes osmotic swelling and cell rupture (L).