Cleidocranial dysplasia
A genetic (inherited) disorder of bone development characterized by: {{}}Absent or incompletely formed collar bones (the “cleido-“ part refers to the clavicles, the collar bones) The child with this disorder can bring its shoulders together or nearly so; and Typical cranial and facial abnormalities with square skull, late closure of the sutures of the skull, late closure of the fontanels (the soft spots), low nasal bridge, delayed eruption of the teeth, abnormal permanent teeth, etc. The disorder is transmitted in an autosomal dominant manner. A parent with the condition has a 50:50 chance that each of their children will have the condition. Boys and girls stand an equal chance of being affected. The gene for the condition has been found on chromosome 6 (specifically, in band p21). The gene is for the transcription factor CBFA1 (core-binding factor alpha subunit 1). Mutations of CBFA1 cause this disorder. A possible example of this disorder has been found in the skull of a Neanderthal man. (The patient could not be interviewed as to family history).

a rare autosomal dominant disorder caused by mutation in the RUNX2 gene (locus: 6p21), which encodes an osteoblast-specific transcription factor. It is characterized by defective ossification of the cranial bones, with large fontanelles and delayed closing of the sutures; complete or partial absence of the clavicles, so that the shoulders may be brought together, or nearly together, in front; wide pubic symphysis; short middle phalanges of the fifth fingers; and dental and vertebral anomalies. An autosomal recessive form has also been observed. Called also cleidocranial dysostosis. 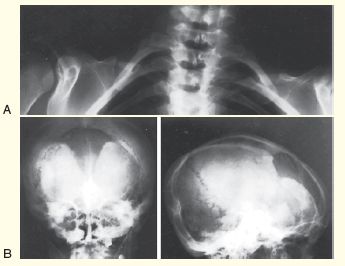 Cleidocranial dysplasia. (A),Absent ossification of lateral portions of the clavicles, hypoplastic glenoid fossae, and dysraphism in the lower cervical spine. (B), Wide fontanelles and suture with multiple wormian bones in the lambdoid suture.