chro·mo·some 'krō-mə-.sōm, -.zōm n any of the usu. linear bodies of the cell nucleus of eukaryotic organisms, the usu. circular bodies of prokaryotic organisms (as bacteria), or esp. in some schools of molecular biology the genomes of DNA viruses (as bacteriophages) that take up basophilic stains and contain most or all of the genes of the organism <both the \chromosomes of cells and those of viruses can duplicate only in the complex environment of a living cell (J. D. Watson)> <an episome, an element that may exist as a free circular plasmid, or that may become integrated into the bacterial \chromosome as a linear sequence (Benjamin Lewin)>
chro·mo·som·al .krō-mə-'sō-məl, -'zō- adj
chro·mo·som·al·ly -mə-lē adv

n.
one of the threadlike structures in a cell nucleus that carry the genetic information in the form of gene. It is composed of a long double filament of DNA coiled into a helix together with associated proteins, with the genes arranged in a linear manner along its length. It stains deeply with basic dyes during cell division (see meiosis, mitosis). The nucleus of each human somatic cell contains 46 chromosomes, 23 of which are of maternal and 23 of paternal origin. Each chromosome can duplicate an exact copy of itself between each cell division (see interphase) so that each new cell formed receives a full set of chromosomes. See also chromatid, centromere, sex chromosome.
• chromosomal adj.

chro·mo·some (chr) (kroґmə-sōm) [chromo- + -some] 1. in eukaryotic cells, a structure in the nucleus consisting of chromatin (q.v.) and carrying the genetic information for the cell. Each organism of a species is normally characterized by the same number of chromosomes in its somatic cells; 46 is the usual number in humans, including the two (XX or XY) that determine the sex of the organism. During cell division, the chromatin is compactly coiled and supercoiled, making the chromosome visible with appropriate staining and permitting its movement in the cell with minimal entanglement. The hierarchical levels of compaction begin with the DNA double helix, which is coiled into nucleosomes; the nucleosomes supercoil into 30-nm diameter chromatin fibers, and the chromatin fibers are packed into 100 kb loops attached to a nonhistone protein scaffold to form the condensed chromosome.2. the analogous structure carrying the genetic material in prokaryotes, mitochondria, and chloroplasts; a closed circle of double-stranded DNA. chromosomal adj 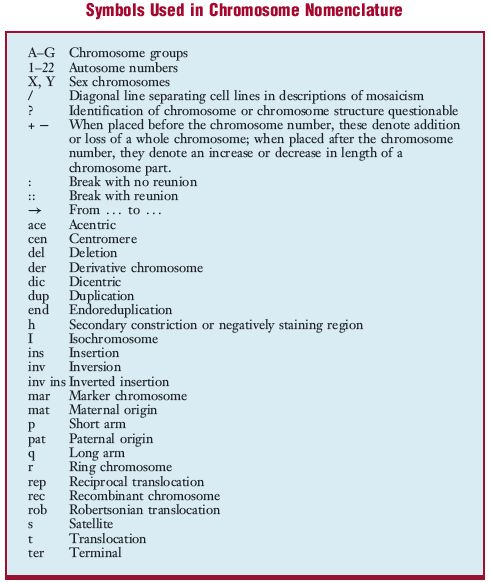 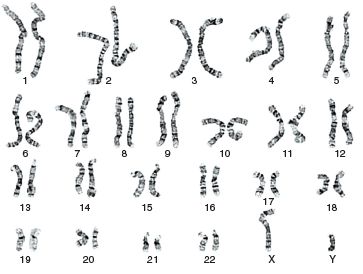 Human male chromosomes with GTG banding, arranged as a karyotype. 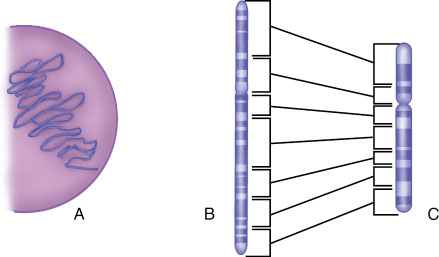