small lymphocytic lymphoma
a diffuse form of non-Hodgkin lymphoma with a low grade of malignancy; it represents the neoplastic proliferation of well-differentiated B lymphocytes and may present with either focal lymph node enlargement or generalized lymphadenopathy and splenomegaly. The predominant cell type is a compact, small, normal-appearing lymphocyte with a dark-staining round nucleus, scanty cytoplasm, and little size variation. It nearly always involves the bone marrow, and often malignant cells are found in the blood, so that its clinical picture is similar to that of chronic lymphocytic leukemia. Called also well-differentiated lymphocytic l. 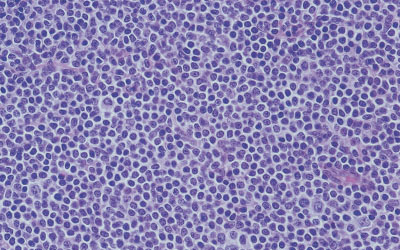