Capillary
One of the tiny blood vessels that connect the arterioles (the smallest divisions of the arteries) and the venules (the smallest divisions of the veins). The capillaries form a fine network in many parts of the body. Although minute, the capillaries are a site where much action takes place in the circulatory system. The walls of the capillaries act as semipermeable membranes permitting the exchange of various substances between the blood stream and the tissues of the body. The substances that are interchanged through the capillary walls include fluids and the key gases oxygen and carbon dioxide. The word "capillary" originally had more to do with hair than blood vessels. It comes from the Latin "capillaris" = hair-like, which was derived from "capillus" = a hair of the head and "caput" = head. The first person to apply the word "capillary" to the most minute of blood vessels is thought to have been the architect, engineer, scientist, inventor, poet, sculptor, painter and anatomic artist Leonardo da Vinci. Leonardo (1452-1519) first became interested in anatomic art when he was asked by a Veronese anatomist named Marc Antonia Della Torre to do the illustrations for a text of anatomy. Della Torre was to do the dissecting and Leonardo the drawings. But Della Torre died unexpectedly. Not to be deterred by Della Torre's demise, Leonardo assumed both tasks. He dissected and drew more than 10 human bodies in the cathedral cellar of the mortuary of Santa Spirito under the secrecy of candlelight, necessitated by the Church's belief in the sanctity of the human body and a papal decree that forbade human dissection. Leonardo recognized that a scientific knowledge of the human anatomy could only be gained by dissecting the human body. This was in striking contrast to the pronouncements of Galen and other anatomists. Da Vinci injected the blood vessels with wax for preservation, an anatomical technique still used today, and in so doing he discovered and named the capillaries (although he did not understand the role they played connecting the arterioles and venules).
* * *
1. Resembling a hair; fine; minute. 2. A c. vessel; e.g., blood c., lymph c.. SYN: vas capillare [TA], c. vessel. 3. Relating to a blood or lymphatic c. vessel. [L. capillaris, relating to hair]
- arterial c. a c. opening from an arteriole or metarteriole.
- bile c. SYN: biliary canaliculus.
- blood c. (symbol c, as a subscript) a vessel whose wall consists of endothelium and its basement membrane; its diameter, when the c. is open, is about 8 μm; with the electron microscope, fenestrated capillaries and continuous capillaries are distinguished.
- continuous c. a c. in which small vesicles (caveolae) are numerous and pores are absent.
- fenestrated c. a c., found in renal glomeruli, intestinal villi, and endocrine glands, in which ultramicroscopic pores of variable size occur; usually these are closed by a delicate diaphragm, although diaphragms are lacking in at least some renal glomerular capillaries.
- lymph c. the beginning of the lymphatic system of vessels; it is lined with a highly attenuated endothelium with poorly developed basement membrane and a lumen of variable caliber. See lacteal (2).
- sinusoidal c. SYN: sinusoid.
- venous c. a c. opening into a venule.

cap·il·lary 'kap-ə-.ler-ē, Brit usu kə-'pil-ə-rē adj
1 a) resembling a hair esp. in slender elongated form
b) having a very small bore <a \capillary tube>
2) involving, held by, or resulting from surface tension
3) of or relating to capillaries or capillarity
capillary n, pl -lar·ies a capillary tube esp any of the smallest blood vessels connecting arterioles with venules and forming networks throughout the body

n.
an extremely narrow blood vessel, approximately 5-20 µm in diameter. Capillaries form networks in most tissues; they are supplied with blood by arterioles and drained by venules. The vessel wall is only one cell thick, which enables exchange of oxygen, carbon dioxide, water, salts, etc., between the blood and the tissues.

cap·il·lary (kapґĭ-lar″e) [L. capillaris hair-like] 1. pertaining to or resembling a hair. 2. any of the minute vessels that connect the arterioles and venules, forming a network in nearly all parts of the body. Their walls act as semipermeable membranes for the interchange of various substances, including fluids, between the blood and tissue fluid. The two principal types are continuous and fenestrated capillaries. Called also vas capillare [TA]. 3. vas lymphocapillare. 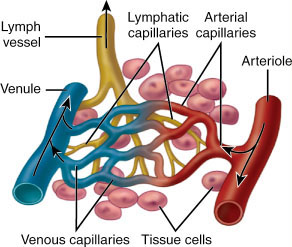 Capillary bed, showing the connection between the arterial and venous capillaries.