Implantation
The act of setting in firmly. In embryology, implantation refers specifically to the attachment of the fertilized egg to the uterine lining, which occurs approximately 6 or 7 days after conception (fertilization). In medicine today, many things may be implanted (embedded). There are breast implants, cochlear implants, defibrillator implants, pacemaker implants, etc.
* * *
1. Attachment of the fertilized ovum (blastocyst) to the endometrium, and its subsequent embedding in the compact layer, occurring 6 or 7 days after fertilization of the ovum in humans. 2. The process of placing a device or substance within the body, e.g., placement of a saline-filled device beneath the breast mound. 3. Insertion of a natural tooth into an artificially constructed alveolus. 4. Tissue grafting. SEE ALSO: transplantation.
- central i. i. in which the blastocyst remains in the uterine cavity, as in carnivores, rhesus monkeys, and rabbits. SYN: circumferential i., superficial i..
- circumferential i. SYN: central i..
- collagen i. SYN: collagen injection.
- cortical i. i. of blastocyst in the ovarian cortex, causing an ovarian pregnancy. See ectopic pregnancy.
- eccentric i. i. in which the blastocyst lies in a uterine crypt, as in the mouse, rat, and hamster.
- interstitial i. i. in which the blastocyst lies within the substance of the endometrium, as in humans and guinea pig s.
- nerve i. planting one nerve into the sheath of another nerve.
- pellet i. intramuscular or subcutaneous insertion of an active therapeutic agent in pellet form to provide protracted absorption at a rate slower than subcutaneous or intramuscular injection and as a means of providing a sustained therapeutic effect without repeated administration.
- periosteal i. insertion of a normal tendon into a periosteum as part of a tendon transplantation operation.
- subcutaneous i. insertion of material under the skin.
- superficial i. SYN: central i..

im·plan·ta·tion .im-.plan-'tā-shən n the act or process of implanting or the state of being implanted: as
a) the placement of a natural or artificial tooth in an artificially prepared socket in the jawbone
b) in placental mammals the process of attachment of the embryo to the maternal uterine wall called also nidation
c) medical treatment by the insertion of an implant

n.
1. (nidation) the attachment of the early embryo to the lining of the uterus, which occurs at the blastocyst stage of development, six to eight days after ovulation. The site of implantation determines the position of the placenta.
2. the placing of a substance (e.g. a drug) or an object (e.g. an artificial pace-maker) within a tissue.
3. the surgical replacement of damaged tissue with healthy tissue (see transplantation).

im·plan·ta·tion (im″plan-taґshən) [in-1 + plantation] 1. attachment of the blastocyst to the epithelial lining of the uterus, its penetration through the epithelium, and its embedding in the compact layer of the endometrium, beginning six or seven days after fertilization of the oocyte. 2. the insertion of an organ or tissue, such as skin, nerve, or tendon, in a new site in the body. 3. the insertion or grafting into the body of biological, living, inert, or radioactive material. 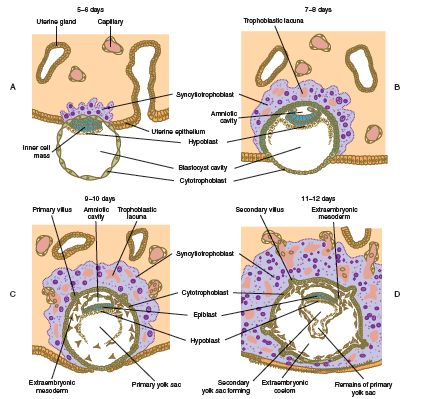 Major stages in implantation of a human embryo. (A), The syncytiotrophoblast is just beginning to invade the endometrial stroma. (B), Most of the embryo is embedded in the endometrium; there is early formation of the trophoblastic lacunae. The amniotic cavity and yolk sac are beginning to form. (C), Implantation is almost complete; primary villi are forming, and the extraembryonic mesoderm is appearing. (D), Implantation is complete; secondary villi are forming.