Duchenne muscular dystrophy
The best-known form of muscular dystrophy, Duchenne muscular dystrophy (DMD) is caused by a genetic error in a gene on the X chromosome that prevents the production of dystrophin, a normal protein in muscle. DMD affects boys and, very rarely, girls with symptoms typically appearing between the age of 2 & 6. The early symptoms begin in the pelvis and upper limbs and are characterized by clumsiness, frequent falling, an unusual gait and general weakness. Some patients also have mild mental retardation. As DMD progresses, a wheelchair may be needed. Muscle-based breathing and heart problems cause death for most patients by their early twenties. There is no cure for DMD. Current treatment is directed toward symptoms, such as providing as assisting with mobility, preventing scoliosis, and providing pulmonary therapy (respiratory toilet). Gene replacement with dystrophin minigenes is being investigated but no cure appears around the corner. The DMD gene: The muscular dystrophies associated with defects in dystrophin range greatly from the very severe Duchenne muscular dystrophy (DMD) to the far milder Becker muscular dystrophy (BMD). DMD and BMD result from different mutations in the gigantic gene that encodes dystrophin. The DMD gene contains 79 exons spanning at least 2,300 kb. Deletions cause deficiencies in 1 or more of these, which may explain why mental retardation and cardiomyopathy sometimes accompany DMD, for there are clearcut differences in clinical presentation depending on what the deletions remove from the dystrophin gene. The DMD gene encodes a 3,685-amino acid protein product. From its amino acid sequence, dystrophin is similar to spectrin and other cytoskeletal proteins. It is rather like an I-beam with globular domains at each end, joined by a rod-like segment in the middle. History: The disease is named for the pioneering 19th century French neurologist Guillaume Benjamin Amand Duchenne. After graduating in medicine, he practiced in the provinces but returned to Paris in 1842 to pursue medical research where he became known under the name of Duchenne de Boulogne to avoid confusion with Édouard Adolphe Duchesne, a fashionable society physician. Duchenne was a diligent clinical investigator, meticulous in recording the patient's history. He followed his patients from hospital to hospital to complete his studies. In this way he developed an exceptionally rich resource of clinical research material, far superior to that available to a single physician or hospital. Duchenne described a boy with the form of muscular dystrophy that now bears his name in the 1861 edition of his book "Paraplégie hypertrophique de l'enfance de cause cérébrale." A keen photographer, he depicted his patient a year later in his "Album de photographies pathologiques." In 1868 he gave an account of 13 affected children under the designation "paralysie musculaire pseudohypertrophique." The term "pseudohypertrophic" stuck to this form of muscular dystrophy. Duchenne was the first to do a biopsy to obtain tissue from a living patient for microscopic examination. This aroused a deal of controversy in the lay press concerning the morality of examining living tissues. Duchenne used his biopsy needle on boys with DMD and concluded correctly that the disease was one of muscle.

Duchenne type muscular dystrophy the most common and severe type of pseudohypertrophic muscular dystrophy; chronic and progressive, it begins in early childhood. It is characterized by increasing weakness in the pelvic and shoulder girdles, with pseudohypertrophy of the muscles followed by atrophy, lordosis, and a peculiar swaying gait with the legs kept wide apart. It is transmitted as an X-linked trait and has been linked to mutations of the gene encoding the protein dystrophin. Affected individuals, predominantly males, rarely survive to maturity; death is usually due to respiratory weakness or heart failure. Called also Duchenne or Duchenne-Griesinger disease, Erb muscular d., and Zimmerlin atrophy. Cf. Becker muscular d. 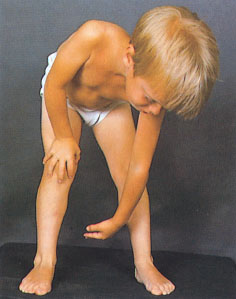 Duchenne muscular dystrophy. Earlier stage of characteristic and progressive difficulty in rising from the floor, requiring unilateral hand support on the knee.