fistula see CASSIA FISTULA
fis·tu·la 'fis(h)-chə-lə, Brit also 'fis-tyu̇-lə n, pl -las or -lae -lēalso -lī
1) an abnormal passage that leads from an abscess or hollow organ or part to the body surface or from one hollow organ or part to another and that may be surgically created to permit passage of fluids or secretions <a congenital tracheoesophageal \fistula> <an arteriovenous \fistula was reconstructed in the right arm for dialysis (Pasteur Rasuli )(et al)>
2) FISTULOUS WITHERS

n. (pl. fistulae)
an abnormal communication between two hollow organs or between a hollow organ and the exterior. Many fistulae are caused by infection or injury. For example, an anal fistula may develop after an abscess in the rectum has burst (see ischiorectal abscess), creating an opening between the anal canal and the surface of the skin. (See also vesicovaginal fistula.) Crohn's disease has a particular tendency to cause fistulae to form between adjacent loops of bowel or from bowel to bladder, vagina, or skin. Some fistulae result from malignant growths or ulceration: a carcinoma of the colon may invade and ulcerate the adjacent wall of the stomach, causing a gastrocolic fistula. Other fistulae develop as complications of surgery: after gall-bladder surgery, for example, bile may continually escape to the surface through the wound producing a biliary fistula. Fistulae may also be a form of congenital abnormality; examples include a tracheo-oesophageal fistula (between the windpipe and gullet) and a rectovaginal fistula (between the rectum and vagina).
An arteriovenous fistula is a surgical connection between an artery and a vein, usually in a limb, to create arterial and venous access for haemodialysis. It can be a direct anastomosis between the artery and vein or a loop connecting the two, which may be autogenous or prosthetic.

fis·tu·la (fisґtu-lə) pl. fistulas, fisґtulae [L. â€œpipeâ€] an abnormal passage or communication, usually between two internal organs, or leading from an organ to the surface of the body; see illustration. Such passages may also be created surgically for arteriovenous access or experimentally to obtain body secretions for physiologic study. fistulous adj 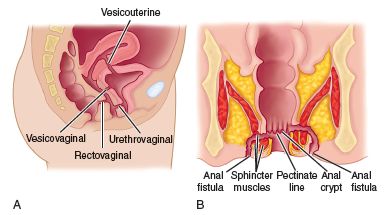