Cerebrum
The largest part of the brain. It is divided into two hemispheres, or halves. The word "cerebrum" is the Latin word for "brain." The Romans used the same word to refer to the "skull" (which houses the brain) and the "head" (which houses the skull). And in Rome "cerebrum" also meant "understanding" (and a fiery temper). The word "cerebrate", meaning "to use the mind or think", comes from the Latin "cerebrum."
* * *
Originally referred to the largest portion of the brain, including practically all parts within the skull except the medulla, pons, and cerebellum; it now usually refers only to the parts derived from the telencephalon and includes mainly the cerebral hemispheres (cerebral cortex and basal ganglia). [L., brain]

ce·re·brum sə-'rē-brəm, 'ser-ə-brəm n, pl -brums or -bra -brə
1) BRAIN (1)
2) an enlarged anterior or upper part of the brain esp the expanded anterior portion of the brain that in higher mammals overlies the rest of the brain, consists of cerebral hemispheres and connecting structures, and is considered to be the seat of conscious mental processes: TELENCEPHALON

(telencephalon)
n.
the largest and most highly developed part of the brain, composed of the two cerebral hemispheres, separated from each other by the longitudinal fissure in the midline. Each hemisphere has an outer layer of grey matter, the cerebral cortex, below which lies white matter containing the basal ganglia. Connecting the two hemispheres at the bottom of the longitudinal fissure is the corpus callosum, a massive bundle of nerve fibres. Within each hemisphere is a crescent-shaped fluid-filled cavity (lateral ventricle), connected to the central third ventricle in the diencephalon. The cerebrum is responsible for the initiation and coordination of all voluntary activity in the body and for governing the functioning of lower parts of the nervous system. The cortex is the seat of all intelligent behaviour.
• cerebral adj.

cer·e·brum (sə-reґbrəm) (serґə-brəm) [L.] 1. the main portion of the brain, occupying the upper part of the cranial cavity; its two hemispheres (see hemispherium cerebri), united by the corpus callosum, form the largest part of the central nervous system in humans. It is derived (developed) from the telencephalon of the embryo. In official nomenclature, the term is considered an alternative to telencephalon [TA]. 2. a term sometimes applied to the postembryonic prosencephalon and mesencephalon together or to the entire brain. cerebral adj 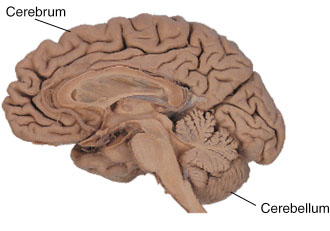 Cerebrum and cerebellum in a midline sagittal section.