Kawasaki disease
This disease has nothing to do with the motor bike of the same name. It is a syndrome of unknown origin that mainly affects young children, causing fever, reddening of the eyes (conjunctivitis), lips and mucous membranes of the mouth, ulcerative gum disease (gingivitis), swollen glands in the neck (cervical lymphadenopathy) and a rash that is raised and bright red (maculoerythematous) in a glove-and-sock fashion over the skin of the hands and feet which becomes hard, swollen (edematous) and peels off. Also called the mucocutaneous lymph node syndrome. The name of mucocutaneous lymph node syndrome is quite descriptive because the disease is characterized by the typical changes in the mucus membranes that line the lips and mouth and by the enlarged and tender lymph glands. The syndrome was first described in the late 1960's in Japan by the pediatrician Tomisaku Kawasaki. Kawasaki disease affects the vascular system, and is now the main cause of acquired heart disease in children. It is most common in people of Asian descent, and is both more common and more deadly in males. The cause of the disease is a mystery. Current theories include viral causes or an environmental toxin. Treatment is usually with IVIG (intravenous immunoglobulin). To learn more, see Kawasaki Disease.

Ka·wa·sa·ki disease .kä-wə-'sä-kē- also Ka·wa·sa·ki's disease -kēz- n an acute febrile disease of unknown cause affecting esp. infants and children that is characterized by a reddish macular rash esp. on the trunk, conjunctivitis, inflammation of mucous membranes (as of the tongue), erythema of the palms and soles followed by desquamation, edema of the hands and feet, and swollen lymph nodes in the neck called also mucocutaneous lymph node disease, mucocutaneous lymph node syndrome
Ka·wa·sa·ki kä-wä-sä-kē Tomisaku (fl 1961)
Japanese pediatrician. Kawasaki first discovered mucocutaneous lymph node syndrome in Japanese children in 1961. In 1967 he published his findings based upon 50 case studies, all of which involved Japanese children five years old and younger. Since that original report, however, Kawasaki disease has been observed in other countries and in patients who are considerably older.

(mucocutaneous lymph node syndrome)
a condition of unknown cause affecting young children, usually less than five years old, and characterized by fever, conjunctivitis, a sore throat, and a generalized rash and reddening of the palms and soles. This is followed by peeling of the fingers and toes. The fever usually persists for 1-2 weeks. In approximately one-fifth of children there is involvement of the coronary arteries and heart muscle (myocardium), resulting in myocarditis and aneurysm of the coronary arteries. About 2% of cases are fatal. The aneurysms will usually resolve spontaneously but slowly. Treatment involves aspirin therapy, and gammaglobulin has recently been shown to reduce the risk of coronary artery disease.
T. Kawasaki (20th century), Japanese physician

a syndrome of unknown etiology, usually affecting infants and young children, associated with vasculitis of the large coronary vessels and numerous other systemic signs, including fever, conjunctival injection, changes of the oropharyngeal mucosa, cervical lymphadenopathy, and maculoerythematous skin eruption that becomes confluent and bright red in a glove-and-sock distribution; the skin becomes indurated and edematous and often desquamates from the fingers and toes. Called also mucocutaneous lymph node syndrome. 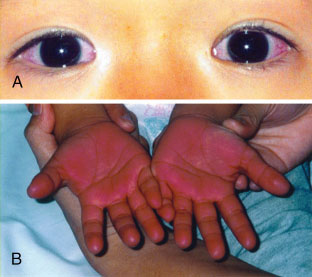